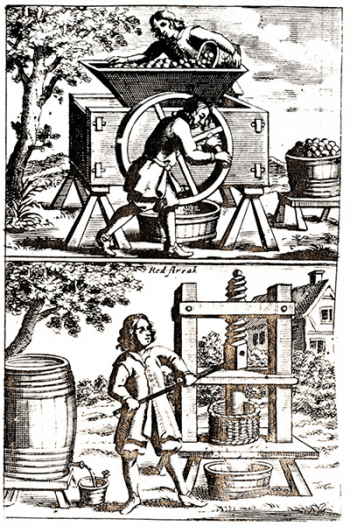 Cider as we know it today was born in medieval times in France, more precisely in Normandy. The first news of an apple-based drink, however, trace back to Ancient Egypt. References to this kind of drink can also be found in Bizantine and Greek literature, where it is depicted as a precious and appreciated good.
In Italy cider culture was first introduced by Julius Caesar after his campaigns in Brittany, and soon became popular with the Roman aristocracy. However, even if the Celts were the first to produce and distribute this beverage, especially for medicinal use, the Arabs brought great innovation in the cultivation of apples and thus increased their distribution. Their innovative methods soon reached the Asturias region in Spain, where cider had an exponential growth through the XII, XIII and XVIII centuries. Various historical records of commercial exchanges concerning cider have been found in this area.
During Medieval times France was the cradle of cider culture, Normandy in particular, where is was considered a luxury good, only reserved to the richest citizens.
In 1700 cider culture experiences a boom and cider breweries started to appear all over Brittany. Crucial factors in the successful diffusion of cider were the low cost of apples with respect to the wheat used to produce beer and the scarce availability of wine.
In Great Britain the area where cider has been most widely diffused is Hertfordshire. It was introduced in 1000 aC by William the Conqueror and soon became so popular that is was often preferred to water to baptize children, as it was considered purer.
Even if in the following centuries cider became popular all over the world, the state with the highest production and consumer base is still the United Kingdom, where its consumption is nearly equals that of beer.
From an etymological point of view, the word cider is born in the oïl languages around 1130-1140. Precedingly it had been called auppegard, épégard, yébleron, sistr. Basque sailors called it sagarnoa or sagardoa, meaning “apple wine”. In Greece cider was known with the Semitic names of σικερίτης sikerítēs o σίκερα síkera, from the Hebrew שכר šēkār. In Latin it was called sīcera, which gave origin to the modern name of cider.